AlBird recently sat down with Claudio Capo from Tanzgemeinschaft for a little interview about the lastest ‘Secret Ballroom Gems Vol. V‘ VA, about being Ballroom Records’ A&R and Label’s Manager, about the artistry life as an Artist and more! And loads of love!!! Enjoy the read!

Read full article here or click the image below 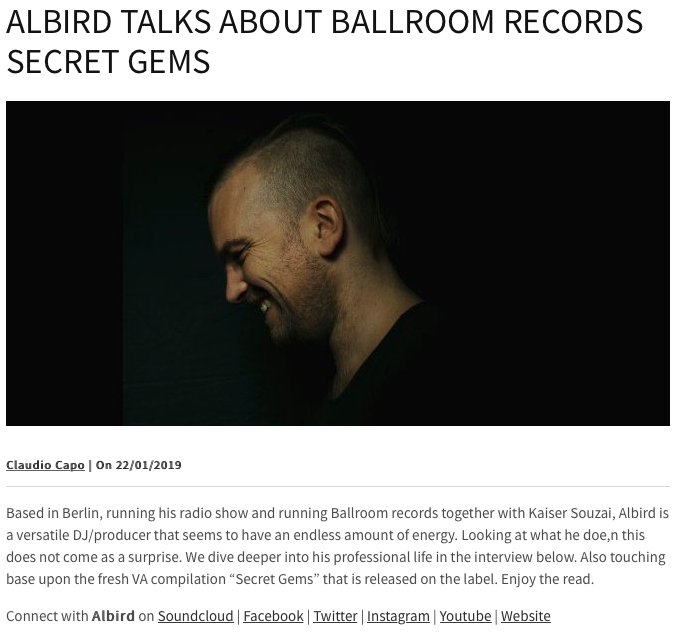 Hey Albert, Hope you are doing fine?
Hey Claudio, great to chat and thanks for inviting me for this interview.

First the necessary retrospective at the beginning of the year. Which good things did you remember from 2018?
Well, 2018 was actually a quite big year. A year with some significant changes for myself.

After living in Vienna for the past 7 or 8 years, I’ve decided to move to Berlin in March last year. I kind of felt stuck in Vienna and not going anywhere with my music. And since I already had quite a lot of friends in Berlin and played several gigs around the city I thought it was best for me to move on.

At the same time, I also got the opportunity to join Kaiser Souzai’s Ballroom Records. We’ve already been close friends for quite some years and he needed assistance with the label so yeah it was really a no-brainer to take that opportunity and join as A&R and Label Manager. I integrated my radio show/podcast-series “Eagle Sessions” into the label and rebranded it to “Ballroom Records Radioshow“.

Time passed so extremely fast since that time. I was being busy with all kinds of label work, my own productions with releases on labels like Set About, Stick Recordings, BluFin, Gain Records, Natura Viva and many more. And of course on Ballroom. It’s been my most productive year so far and it’s great to get appreciation from many great artists so far. Highlighted with being played by Richie Hawtin at Contact Festival.

Also, I’m part of a team developing a new technology/app specially made for DJs, producers and labels. Tracking music and telling Artists who’re playing their tracks, when and where. All in real time. We’re currently in beta phase but also already had some great success for example at last years ADE being named among the “Top Five Companies To Watch” in the music biz. So let’s see.

Any setbacks and how did you overcome them?
Well, I think in the business there are fighting setbacks almost on a daily basis. I think it’s part of the deal, and maybe there would be more stable jobs but I wouldn’t trade them for anything in the world right now.

As a DJ/producer/label owner with a busy schedule, how do you find time for your love life?
Love life??? Hahaha … I knew that one was coming. Should have told you about that one.

Well, it’s all about finding the right balance. The thing with being self-employed is that you don’t have proper office times, so basically you’re always online and the office is never closed. Though I’ve learned over the recent years that you need to take your time, find some inner peace and enjoy days being off. Also, I do meditate and yoga on a daily basis to keep myself clear-minded and relaxed.

With Ballroom records, you enter 2019 with the 5th instalment of your Secret Ballroom Gems. A yearly affair? Love the tracks. How do you select them?
That’s cool, thanks. Yeah, it’s that time of the year again. Actually, we’re releasing them twice a year. One in January, the other one around July.

How do we select them? Well, it’s always Kaiser Souzai and me deciding together in various listening sessions. It’s quite difficult sometimes to choose the tracks as there’s a lot of great music coming in our demo’s mailbox and you can’t release them all. :p

For me, it’s mostly about the first perception of a track. Same as when I’m listening to promos or finding tracks on Beatport. It’s got to catch me right away.

How much room is there on your record label to select up and coming artist that need some development? And how does that work?
That’s actually why the Secret Gems VA series was created to give up and coming artist a chance to get releases out there. And being part of those VAs as a smaller artist you’ve got the chance to multiply the attention through the others on there. I think it’s a great tool for getting your name out there or for a growing reputation.

Something about creativity. What’s your creative process when working on music? Do you have an idea in mind or do you somehow experiment and see what’s coming?
That’s different each time I think. Never really thought about that, really. Mainly the inspirations come while working on a track. My main tool for my productions is my Moog Sub37. Most of the time when I’m looking for melodies or sounds I first create the beat and right basic vibes, put on a loop and record on the go 5 to 10 to 20 minutes of melodies or sounds. Mostly, I find something I really like and then I dig deeper.

Some walk in nature & records sounds, some just dive in the studio and go with it. Where do you draw your creative influences from?
That mainly happens in the studio but also when out clubbing listening to great tracks I’ve never heard before. And of course through my radio show. Playing some of the latest tracks of the week each week, plus listening to the guest mixes we receive is always a big influence.

What were the first types/genres of music you tried to make?
I started with Rock music I’d say. Being a guitarist and singer I played in various bands and played and recorded a hell of a lot. Later, as a live and studio engineer, I worked for loads of different bands from jazz to funk to blues to rock and metal. So the range is quite large.

Do you think that the kind of music you grew up listening to affects the taste of music you develop?
Sure thing. There are influences from any genre you can use for your music. Doesn’t matter what it is. But it definitely affected me. Still a huge fan of bands like Led Zeppelin, Pink Floyd, The Police, Foo Fighters, Queens of the Stone Age, Pearl Jam and sooooo many more….

What’s next for Ballroom and yourself in 2019?
With Ballroom, we’re carrying on with the work we’re doing. Releasing every 3-4 weeks, airing our radioshow weekly, we’ll be starting our Spotify – mixes in the next weeks with some big name artists, hosting Ballroom Showcases and much more. So loads of work! Haha.

For myself, I’ve got a couple of good releases and remixes already lined up, of course on Ballroom and on labels like Jannowitz, BluFin, Neuhain and some more I can’t tell you about yet. So stay tuned.

I’m also in the middle of planning some little tours to South-East Asia, India and Australia and working to tighten the booking schedule across Europe of course.

Thank you and hope to see you for a beer someday this year!
Definitely … beers on me

Thanks for having me, man!

Who is Purple Kaiser?